A Short History of Prickett & Ellis 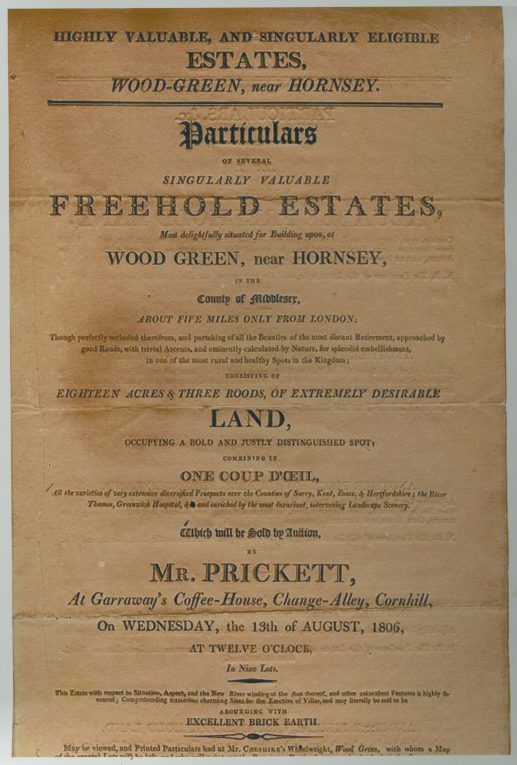 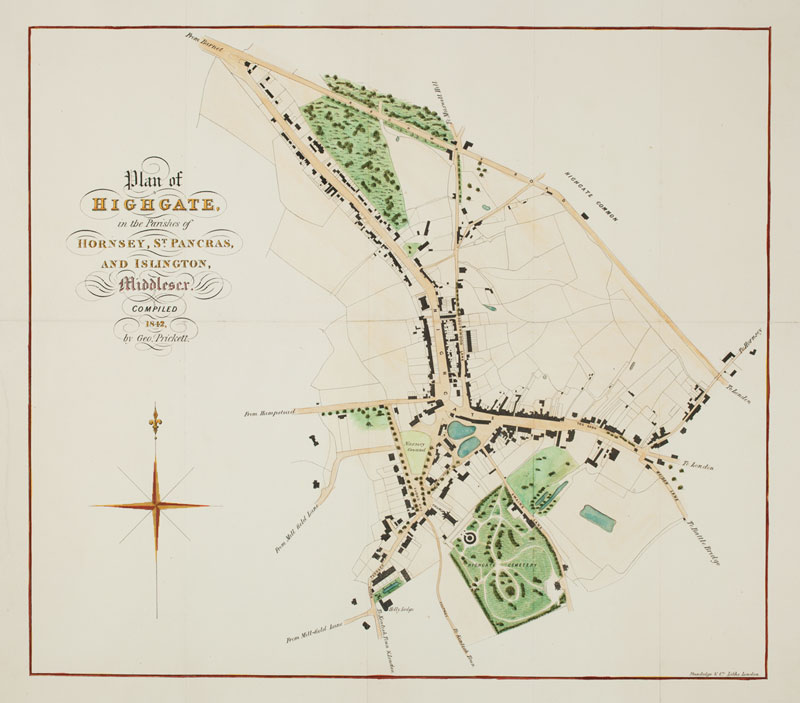 Plan of Highgate by George Prickett 1842 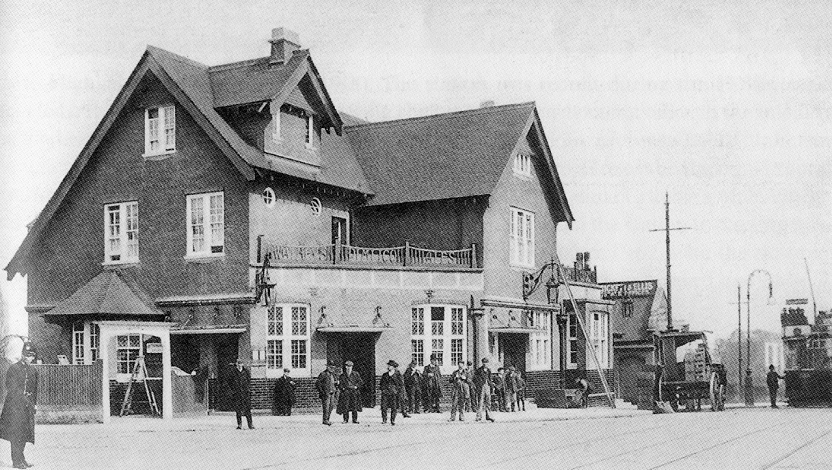 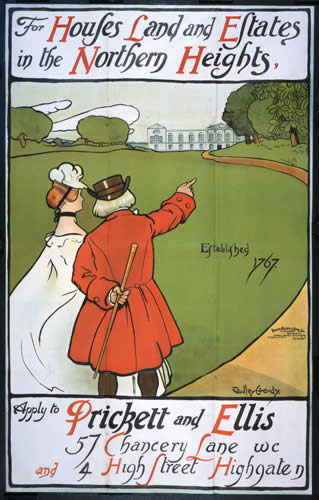 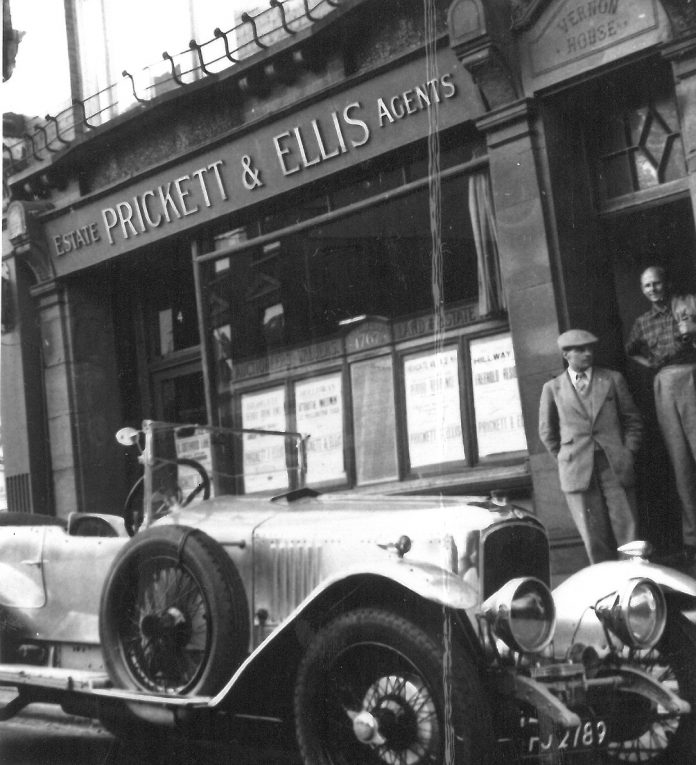 William ‘Tony’ Ellis in front of the Highgate office 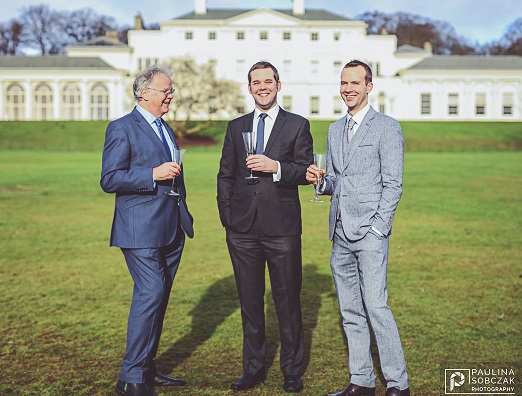 When enterprising auctioneer, John Prickett, born 1733, settled in the tiny hamlet of Highgate he could not have known he would be the founder of a thriving family business which would be alive many generations after his death. John married Ann from Hornsey who ran her family carpentry business Together they had three sons and, in 1767, they established an auctioneering business in Highgate Village. That’s the big date for us – the 250th anniversary we celebrated last year.
Kenwood House figures large at the start of our story. Records show that Ann supplied carpentry work and one of the Prickett sons, John (the younger), drew up a map of the house and grounds for the first Earl of Mansfield, which still exists but is kept in Scone Palace. Kenwood would have been a prestigious project to be involved in as Mansfield was a well-known man of status and power.

Young John, mentioned above, married another Ann, in St Mary’s, Hornsey, and they went on to have at least nine children. He clearly inherited some of the entrepreneurial spirit of his parents and worked hard surveying and auctioning off several huge tracts of land in the fields and estates outside London, including in Hendon and Wood Green. We still have the 1806 particulars in our offices, along with other items collected over the centuries. His work often took him further afield too and the London Metropolitan Archives hold maps and plans, drawn or re-delineated by John Prickett from counties such as Kent and Devon.

John Prickett’s son, George, followed him into the business becoming a surveyor and auctioneer. He married Sarah Dayton in 1817 and by the 1820s the business was now called Messrs. Prickett & Sons, as another son, Herbert, was involved. There were problems with the partnership and in 1832 Herbert left owing his father money. Consequently he was cut out of his father’s will, which must have been annoying as John died in 1833 leaving a substantial portfolio of shares and property, which was still being disputed over twenty years later.
In 1841, George Prickett was living near St. Pancras station from where he could easily commute between his two offices; one in Highgate and the other in Chancery Lane. His lasting legacy from this time is the wonderfully rich map he produced of Highgate for inclusion in a book written by his brother Frederick in 1842. ‘History and Antiquities of Highgate’ is still a good read and a wonderful contemporary source for anyone interested in the subject. (It can be downloaded for free from archive.org). George died in 1856 and two of his sons, George and Walter took over the business. In their time they saw a huge growth in the Highgate area, as, with the arrival of the Great North Railway in 1867, the conurbation of London expanded rapidly outwards.

Arrival of the Ellises:

It was around this time that Charles Ellis moved to London from Shropshire with his brother Thomas. We know that Charles married Ann Hain in 1839 in Chiswick, while working as a conveyancer, and they had three sons: James; Charles; and Henry. In the 1870s this young Henry was working as a land surveyor in Chancery Lane when he met Walter Prickett. The two men became close friends and, later, business partners with Henry the executor of Walter’s will when he died in 1884.
Henry Ellis married in 1872 and moved into 21 West Hill, Hermitage Villas, in Highgate. He moved his office closer to home in the 1880s, building new premises, strategically placed at the exit of Highgate Station, near the Woodman pub. He also took over the Prickett offices in Highgate High Street as the new generation of Pricketts were not interested in being involved. Meanwhile, in the 1880s another partnership was formed with Frederick Venables and the name Prickett & Venables, later changed to Prickett, Venables & Co was used up until around 1900. However, the name we are familiar with today, Prickett & Ellis, was the one Henry (now a sole trader) chose to continue trading under some time around 1885-1889. On his death in 1899 his two sons took over; William Henry Ellis ran the Chancery Lane office and Alfred kept the two Highgate offices running.
In 1901 the firm commissioned a poster advertisement from the noted artist Dudley Hardy who featured Kenwood to sell the delights of living on London’s Northern Heights. We are all still very fond of his striking image. By 1925 the firm was thriving, and continued to do so until WWII, with its three offices and furniture shop on Hampstead Lane.

During the war the Chancery lane offices were destroyed in the Blitz and William Henry Ellis died shortly after – his family believed of a broken heart. At the end of the war the Atlee government introduced measures to nationalise most industries, and even talked of including the real estate business. The idea of caps on prices and rents was considered but dropped.

Alfred’s son William became a partner in 1953. In the 1960s he took the bold step of opening a new office at 185 Priory Road, Hornsey. He was joined in the 1970s by his sons Anthony and Nigel, the fourth generation of Ellises and the eighth in the business. In 1978 the Hornsey office moved to 205 Park Road, where it is today, and was run by Nigel. Anthony (Tony) and his father William (also known as Tony) worked out of the office at 27 Highgate High Street.

William (Tony) Ellis retired in 1985 just three years before the financial crash of 1988. The collapse led to the disappearance of many established estate agent names but Prickett & Ellis was one of the few surviving old independent names. In the following years the business has expanded to better serve their client base:
114 Alexandra Park Road, Alexandra Park: This office was acquired in 1989 from Hillyers, a well-established firm of surveyors who occupied a 1930s bank building. Christopher Stone, a local estate agent and surveyor joined the team and re-established a surveying side to the business.
134 Crouch Hill, Crouch End: was acquired from Warmans Surveyors in 1996 on the retirement of Alan Champion.
82 High Road, East Finchley: In the year 2000 Peter Byrne of Bernard Tomkins & Co enabled Prickett & Ellis Residential to move into central East Finchley at no 36 High Road. When no 82 became available it was an obvious next move.
27 Highgate High Street, Highgate: It was also in 2000 that Christopher Underhill joined to run the Highgate office, incorporating another well-known local property name by trading as Prickett & Ellis Underhill.
31 Fortis Green, Muswell Hill: More recently, in 2016 we took over Muswell Hill’s longest serving Estate Office, the original Collins premises. We are delighted to have a presence here, giving our clients even greater choice.

Nigel Ellis has three energetic sons, two of which work alongside him in the business. Nicholas joined in 2003 and Philip in 2006: thus becoming the fifth generation of Ellises and the ninth generation of family who have worked for the company since the eighteenth century. They have been involved in all aspects of the business from day one and this year, fittingly for the 250th milestone, they have overseen, with patience and expertise, a period of rapid advancement in technology in all aspects of the business, including new software, a new telephone system and a new website. Our local community is at the heart of everything we do and our social media reflects this commitment. We are not just the oldest but among the most modern of estate agents as well. Here’s to the next 250 years.